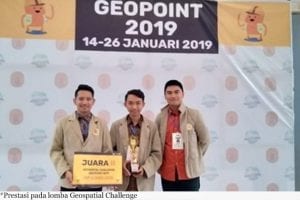 Bandung — SV UGM students, Iqbal Hanun Azizi (2016), Adji Dwi Nugroho (2016), and Dhani Yudi Prasetyo (2018), from D-III Geomatics Engineering Study Program won the ‘Geospatial Challenge’ competition in Geopoint 2019. This competition aims to measure the ability between Geodesy and Geomatics students throughout Indonesia in understanding the field of geology and to establish friendship and improve knowledge of geodesy and geomatics. This activity was held on January 18-20 2019 at the Institut Teknologi Bandung.

According to Adji, the motivation to take part in this competition is to find out how far they understand in the field of Geodesy and Geography both theoretically and practically. In addition, he wants to prove that the D-III Geomatics Engineering Study Program SV UGM is also able to compete nationally. The stages of the competition were divided into several stages: the registration file selection, theoretical allowance, preliminary of practitioners, and the final round with the Quiz Competition.

Adji said that “This team was formed independently and continued to coordinate with each other regarding learning material that had not been learned to establish chemistry”.

Adji added that “We feel so proud because this is the first experience of participating in a competition like this, carrying the the name of D-III Geomatics Engineering Study Program SV UGM, winning the Second Place at National level, and becoming the only D-III study program in the top round who can compete with other universities.” 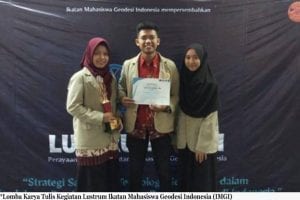 In other activities, Students of D-III Geomatics Engineering Study Program SV UGM, represented by Ary Pratama, Dhita Safira, and Berlian Puji also won achievements by becoming the Champion III of the Writing Competition by Indonesian Geodesy Student Association (IMGI). Lustrum IMGI V is an activity of the Indonesian Geodesy Students Association held every 5 years, which aims to unite and bring together between geodesy and geomatics students throughout Indonesia with a series of activities such as competitions and so on.

This activity was held in Institut Teknologi Bandung (ITB) on January 18-20 2019. The title of their work in this competition is “SMARTOLL (Solution for Toll Network Analysis) as A Renewable Innovation to Analyze the Effectiveness of Travel Accommodation”. The team of D-III Geomatics Engineering Study Program won the 3rd place by defeating other teams, most of whom are undergraduate students.