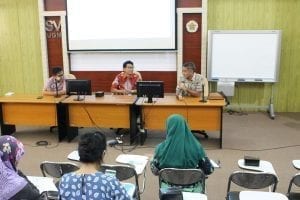 The seminar aims to provide an explanation to the lecturer about IPR, Patent Rights, and Final Assignment Recognition (RTA). It was delivered by three speakers, they are, Prof. M. Hawin, S.H., LL.M., Ph.D. (Professor at the Faculty of Law) about IPR, then Patent Rights by Ferianto, S.Si, (Center for Utilization and Innovation in Science and Technology Worker at the Lembaga Ilmu Pengetahuan Indonesia(LIPI)), and RTA material by Dr.biol.hom. Nastiti Wijayanti, S.Si., M.Sc. (Head of the Research Program Subdirectorate UGM).

“Later there will be a socialization of RTA so that Sekolah Vokasi will be able to include at least 20 RTA proposals, 20 final assignments for students” said the Dean of SV UGM in his speech.

By understanding IPR, Patent Rights, and RTA, SV UGM lecturers are expected to be able to increase the amount of their researches.